In 1900, a group of baptized believers made a historical decision that affords us the privilege of worshipping in what is now called St. Matthew Baptist Church. A small group of Christian men and women started prayer services on Grant Hill and continued until 1908. The group later decided to move its meeting place to Johnson Street, first using one room and then two rooms of the house. The need for services expanded beyond a place just for prayer services. The name of the meeting place was changed to Mission Chapel.  In 1920, members purchased its first parcel of land on Huger Street and built St. Matthew Baptist Church.  On January 4, 2002 the former Charleston Heights Baptist Church at 2005 Reynolds Avenue in North Charleston, SC was purchased and became the new home for St. Matthew Baptist Church.

In its 120 year history, many men and women laid foundational bricks on which we continue to build upon.  As a testament to its strong foundation, St. Matthew has been blessed by the leadership of only five Pastors: 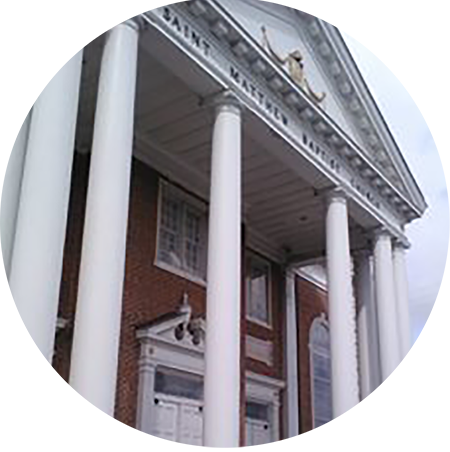 “… And they said, Let us rise up and build. So they strengthen
their hands for this good work.” (Nehemiah 2:18)

In 1900, a group of baptized believers under the leadership of  Reverend Frank Guest made a historical decision that affords us the privilege of worshipping in what is now called St. Matthew Baptist Church. A small group of Christian men and women started prayer services on Grant Hill and continued until 1908. The group later decided to move its meeting place to Johnson Street, first using one room and then two rooms of the house. The need for services expanded beyond a place just for prayer services. The name of the meeting place was changed to Mission Chapel.

Under Rev. Guest’s guidance along with help from devout men like brothers Broughton Mitchell, Ben Wilson, David Miller, Issac Lee and JacJenkins, the mission Chapel grew. In 1920, members purchased its first parceof land on Huger Street and built St. Matthew Baptist Church. The Church flourished under the leadership of Rev. Guest and continued until his death in 1927. In 1928, Rev. A. W. Wright took over as pastor of St. Matthew Baptist. Under his leadership membership grew and remained spiritually alive until his death in 1939.

Reverend Benjamin J. Whipper, Sr. was called to Pastor St. Matthew Baptist Church in November 1940. During the first year of his leadership the Church burned its mortgage. Between the years of 1944 and 1952 there were many accomplishments. These accomplishments included, (1) the purchase of property adjacent to church on Huger Street, (2) the establishment of a Boy Scout Troop (BST) organized in 1948) and remains the largest oldest black BST in Charleston, SC (3) completion of the Church’s Auditorium and (4) the original, Building Fund Drive, created at the inception of the church was completed in 1952.

The First Tutorial (Outreach) Program for black youths was organized in early 1960’s under the supervision of First Lady Sister Lucille Whipper and other local community leaders. St. Matthew Baptist was also the place where early civil rights strategy meetings were held with Rev. Dr. Martin Luther King. After the construction of the Church’s Education Building the Office of Equal Opportunity funded a Child Development Program in an effort to provide services to and for under-privileged children. This endeavor was spearheaded by Sister Lucille Whipper, Sister Mamie Washington and Rev. B.J. Whipper, Sr. the Development Program operated with the Church for over 40 years.

During the 1970’s and 1980’s the following ministries were started, Bus Ministry, Nursery, the Young Adult Ministry (YAMS), Youth Council, the Young Matron society (currently known as Eartha Lee Smith Auxiliary) and the Nurses Unit reorganized. The Guest-Wright Building, housed the Pastor’s Study, Nursery Department, Conference Room and Reception areas. As the decade continued, additional property was purchased, a steeple was placed on the church, the Junior Trustee Board was installed and three (3) Deacons were ordained to the Deacon’s Board. 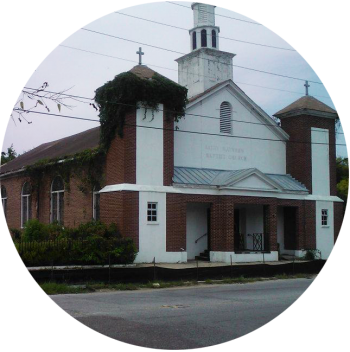 St. Matthew Baptist Church Morning Radio Ministry began in 1990.  On April 19, 1991 a new steeple was erected to replace the steeple damaged by the ravages of Hurricane Hugo. On February 17, 1992 the first Girl Scout Troop was organized by Sister Cathy Pinckney and on January 16, 1994, Rev. James B. Lewis, Jr. became Assistant Pastor, To the dismay of the congregation, in June 1997, Rev. Dr. B.J. Whipper, Sr. announced his retirement. In an effort to show sincere appreciation for fifty-seven (57) years of service, November of that year was designated as Rev. B.J. Whipper, Sr. Month at St. Matthew Baptist Church. The Guest-Wright Building was renamed Guest-Wright-Whipper Building on December 28, 1997 when Rev. Dr. Whipper, Sr. officially retired from service. Later, Sister Lucille Whipper announced her retirement after 31 years of service as Minister of Music. On June 13, 1998, God called His faithful and loyal servant, Rev. Dr. B.J. Whipper home to receive his reward.

On February 28, 2000, St. Matthew Baptist church elected a pastor for the first time in 59 years; the Reverend Dr. Clinton Brantley was installed as Pastor on June 11, 2000 and became the fourth pastor in the history of the church. On November 19, 2000 a memorial service was held for the late Rev. Dr. B.J. Whipper; during the service a beautiful marble and black granite plaque was dedicated. On January 4, 2002 the former Charleston Heights Baptist Church at 2005 Reynolds Avenue in North Charleston, SC was purchased and became the new home for St. Matthew Baptist Church. On September 1, 2002 Rev. Dr. Clinton Brantley began the church’s first early Morning Worship Service; the early service attendance has grown tremendously.

In 2002 under the spiritual and developmental leadership of Rev. Bill Stanfield and Rev. Evelyn Oliveira, Metanoia Community Development Corporation was developed and began offering an after school program to the community. Since that time Metanoia has become a broad movement of people rooted in faith. They invest in neighborhood assets to build young leaders, establish quality housing and generate economic development. Metanoia’s youth programs utilize the church for year-round youth programming and Metanoia’s work would not be possible without a strong partnership with St. Matthew. Metanoia utilizes the third floors of building C and B for its offices and program space.

Under Pastor Brantley’s leadership a Food Bank and Dental Clinic was established, renovations on Buildings B and C were completed, and a 34 passenger church bus was purchased. Instruments such as the organ and drums were purchased, and a sound system was installed. On February 9, 2003, the church’s  corner stone was erected. Pastor Brantley and First Lady Minister Carolyn Brantley established the church’s first Couple’s Ministry. They were both very instrumental for the explosive growth of listeners during the Radio Broadcast, Family Marriage Enrichment Hour. Pastor Brantley over the past seven and a half years has licensed twelve (12) ministers, ordained seven (7) Deacons, restored numerous members, baptized over 200 members and inspired over two hundred twenty five (225) baptized believers to join St. Matthew under Christian experience.

The year of 2008, was the year of new beginnings for St. Matthew; it was with great expectations and many blessings from God we embraced and carried out Pastor Brantley’s God given vision.  In 2013, St. Matthew Baptist Church continues to move in the direction of God’s desire for our Christian growth.

Thank you for visiting our site that is still under construction.  God bless you, and we hope to see you soon in one of our many services.